Looking at the calendar is kind of a surreal experience. First of all, days of the week haven't really mattered to us since we left last fall--even Workaways rarely run on a Monday-Friday schedule. (This lack of day-of-the-week-knowledge has slapped us in the face countless times. People ask, "Oh, so you're here until Thursday?" I have no idea, I only know I leave on the seventeenth!) Second of all, it's literally September now. How did that happen?

For real. Tomorrow, September 6th, is both the two-week mark since we touched down in Ecuador, and also eleven months since we hit the road on this trip entirely. We are 11/12ths of the way to the slightly nutty (and a little bit arbitrary) goal we wildly set for ourselves way back before we were engaged. [Insert very wide-eyed emojis]

Two weeks ago, Andrew's sister Claire and her husband Dan met us at the airport in Quito. Though it was entirely unplanned, we realized once we were in the taxi cab on the way to our Airbnb, we'd landed on the two-year anniversary of their move here. Quito, Ecuador is the highest capital city in the world, at 9,350 feet above sea level. We weren't really sure what to expect from the elevation; some people told us we'd be sick for a week, others said we wouldn't feel a thing. Claire and Dan had picked an apartment for all of us some distance away from the hilliest part of town, as they'd learned from their mistake their first visit here--any kind of physical exertion before you're used to less oxygen in the air isn't what you want as an intro to Ecuador. Our building had an elevator. 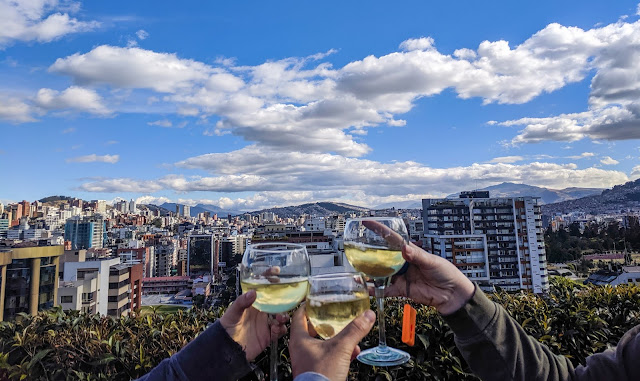 It also had an amazing rooftop terrace, which is where we enjoyed views of the enormous city and the surrounding mountains. This was a nice feature, as we ultimately ended up laying low for the most part in Quito. Though intellectually we were dying to explore this new city in a new country on a new continent, we were also brutally jet-lagged. (Ecuador is only two hours ahead of our hometown in Washington, but a full seven hours behind Spain, and we've been acclimated to European time since December!) The apartment was very comfortable, and we did a lot of sleeping and hanging around just the four of us. Neither Andrew or I felt sick, but we were very lethargic, and I found myself yawning constantly.

We did take an afternoon adventure to Mitad del Mundo, the Center of the World. It's a large monument and museum sitting on the equator, which is very neat. Existing pretty much on the centerline of the globe is weird and confusing, but also cool. The sun honestly feels very, very close. The air temperature can be 65 degrees (F), but in direct sun it feels like the 80's. As soon as the sun goes behind a cloud, it's freezing. Ecuador is slowly heading into "spring" right now; an abrupt shift for us from summertime Spain. The sun also rises and sets at almost exactly 6:30, morning or evening, every day.

Kids on the equator.

After a few days in Quito, we all went to the airport together and took a 53 minute flight to Cuenca, where Claire and Dan live. Cuenca is at a slightly lower elevation (8,399 feet), and is a smaller colonial city. It's definitely beautiful, and while much less hilly, there are still stunning mountains all around us. Claire and Dan's house (also home to Lana the collie and Chungus the kitten!) is in a suburban area close to the River Yanuncay, and it's about a 30 minute walk into town. Taxis are also plentiful and only cost about two or three bucks to get around the city.

We've had a bit more energy to do things since arriving in Cuenca, and we've done a lot of wandering around to see what we find. The historic part of the town has beautiful buildings, and a massive "New Cathedral." There's no shortage of shopping, and lots of people pushing wheelbarrows of fruits and vegetables for sale down the sidewalks.

Also in the middle of town is the Pumapungo museum and Incan ruins. The park allows you to walk through the terraced remains of the Inca ruins, and also has agriculture displays and a collection of native Ecuadorian birds. It's free to access! Explore to your heart's content! We have hopes to see the Ingapirca ruins while we're here, but for now, this was our first introduction to actual traces of this historic civilization. The museum also had a display of shrunken heads, and an explanation about the ritual and its history. There's so much new stuff to learn.

A few days into our stay in Cuenca was a big, important day for Andrew and I: our first wedding anniversary! Since our first date on Valentine's Day in 2014, celebrating the year markers in our relationship has been a priority for us. We're pretty proud of the partnership we have, and generally have a really good time together, so we've always taken a weekend away and done something special. Our new date, instead of Valentine's Day (though we'll still celebrate that, no doubt) is August 31st, and despite being on a trip currently, we made a reservation at a fancy restaurant that Claire recommended and snagged a super cheap but very nice room with a view at a snazzy hotel next door. Our dinner was AMAZING. We split a bottle of dry Argentinian rosé, had the salmon tartare to start, and then Andrew ordered spicy prawns that were massive and I had a delicious rice dish with a medley of seafood. Mine even had big, purple octopus legs, and I've never had seafood so tender. We told our waiter in broken Spanish that it was our first anniversary, and then we were surprised with a complementary dessert. We were thrilled. One of our favorite activities is eating, so this was a very enjoyable evening, and a quality way to celebrate the unforgettable first year of marriage we've just had.

One of the best meals <3

Our first big day trip was to the Cascada el Chorro de Girón, a truly impressive 230 foot waterfall a little over 30 miles outside of Cuenca. We were very grateful for explicit instructions on the Internet of how to get there, because our journey went as smoothly as it could have. We first took a taxi to Terminal Terrestre, the big bus station on the other end of town, for about $3. After wandering into the wrong entrance first, we found the main building at the station and asked the tourism office where we could catch the bus to Girón. We were pointed in the right direction, and first paid ten cents to get through the turnstile to the actual buses. (There was a small problem printing the second turnstile ticket even though we paid, so the attendant squished us both into the revolving door together. This was good because we'd used the only two dimes I could find.) We wandered along the bustling line of bus stalls, asking around for Girón, until we realized there were signs showing which stall was for which bus. Though our bus was 15 minutes later than the posted time on the screen, it did arrive, and it was only $1.

The brakes on the vehicle were terrifyingly screechy, but no one else seemed concerned, and it took us through some breathtaking mountains. Though the internet promised it was a "30 minute ride out of Cuenca," we were definitely on that bus for more than an hour. Still, it dropped us off on the main street in Girón, which was where we wanted to be. Our next step was to flag down a taxi, which we did within minutes, and I simply asked for, "El Chorro, por favor." Off we went, up the winding hill, past small farm houses and abundant gardens and at one point, a man on a horse who appeared to be herding a pack of dogs down the street. Our taxi dropped us off right at the entrance to the park, we paid him $5, and a woman came out to collect our park entrance fee. She told us it was $1.50 per person, though I think that was technically the price for locals. We didn't argue.

Ready to begin the adventure...

The walk to the falls took maybe 5 minutes. It was up some stairs, but it wasn't difficult, and then suddenly we were in the spray of the Cascada. We couldn't fit the whole thing in a photograph, it was massive! I'd read online that after heavy rain, the volume of water is too high to access the bridge at the base of the falls, but we visited at a good time of year. We could get right down to the rocks by the pool. There were a few families with small children heading out as we arrived, and a group of Americans who were in Ecuador on a humanitarian trip volunteering in orphanages.

We climbed around and ate the peanut butter and jelly sandwiches we'd brought along, and agreed that the intense hike to the top of the falls wasn't for us. (The internet said it was several hours and very challenging if you don't have experience hiking at this altitude. We think we'll maybe try hiking somewhere next week.) Instead, we decided to walk back down the road to town instead of taking a return taxi. The views were fabulous and the whole thing was paved, so it was worth it, even though it took over an hour. We met a lot of dogs and actual baby puppies roaming around (unclear if they were stray or not) and passed some very fat and shiny horses. Across the street from the horses, a man was working in his garden. "Where are you from?" he called to us, I assume because he heard us talking, or could just tell from the *everything about us* (quote from John Mulaney) that we are American. "Seattle!" we replied. "Cool, I lived in Connecticut for 30 years!" We asked what he did in Connecticut, but all he said was, "Just lived."

It started raining right as we got to the bottom of the hill. Luckily we'd brought our rain coats in preparation for waterfall spray, so our spirits weren't dampened. As we arrived back on the main road in Girón, we saw the bus to Cuenca was at the stop, aka flawless timing. Instead of taking the bus all the way back to Terminal Terrestre, we watched our dot moving on our GPS and got off when it stopped vaguely near Claire and Dan's neighborhood. It was still raining, and goes from daylight to dark in about ten minutes here, but the 20 minute walk home was easy enough and saved us a second return taxi fare.

We still have ten days left in Ecuador, and now that we're gaining confidence navigating, we're hoping for some more solid field trips. We have plans to go to the thermal spa with Claire and Dan, meet some of their friends, maybe hike, maybe visit the animal sanctuary of rescued native Ecuadorian wildlife, maybe see some Incan ruins. There's lots still to do, and we're definitely hooked on South America now. We'll be back in the future for a pretty solid explore, I know it.

PUPPY! There were 5 dogs at this moment, all too wiggly to get a group picture.